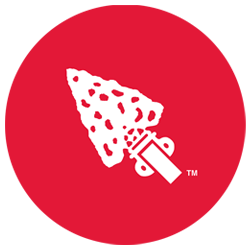 Black Hawk Lodge is able to accept nominations of Arrowmen for the Founders Award and Vigil Honor.

Introduced at the 1981 National Order of the Arrow Conference, the Founder’s Award recognizes Arrowmen who have given outstanding service to their lodge. The award is reserved for an Arrowman who demonstrates that he or she personifies the spirit of selfless service, as advocated by founder E. Urner Goodman and cofounder Carroll A. Edson.

The award is a handsome bronze medallion bearing the likenesses of E. Urner Goodman and Carroll A. Edson, with a wooden base and a brass plate suitable for engraving. Available for uniform wear is a gold-colored arrow suspended from a red ribbon.

Lodges may petition the national Order of the Arrow committee to present between two and four awards annually, depending on the number of members in the lodge. If the lodge presents more than one award, at least one must be awarded to a youth under the age of 21.

Alertness to the needs of others is the mark of the Vigil Honor. It calls for an individual with an unusual awareness of the possibilities within each situation. The Vigil Honor is the highest honor that the Order of the Arrow can bestow upon its members for service to lodge, council, and Scouting. Membership cannot be won by a person’s conscious endeavors.

The Vigil Honor is a high mark of distinction and recognition reserved for those Arrowmen who, by reason of exceptional service, personal effort, and unselfish interest, have made distinguished contributions beyond the immediate responsibilities of their position of office to one or more of the following:

Under no circumstances should tenure in Scouting or the Order of the Arrow be considered as reason enough for a Vigil Honor recommendation.

Any member of the Order of the Arrow registered in Scouting and in good standing in a regularly chartered lodge is eligible for recommendation to the National Order of the Arrow Committee for elevation to the Vigil Honor provided that, at the time of the recommendation, the individual has been a Brotherhood member for a minimum of two years. A lodge may nominate a maximum of two percent of their registered Arrowmen once a year, through the Vigil Honor petition. At least 50 percent of all nominated must be under 21 at the time of nomination.